Vampires Don't Have Overdue Books!
But Mary Sues, Do! 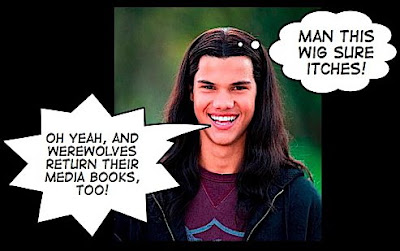 Edward knows the importance of keeping an intact library....as we all know, throughout the years he has been an avid reader...thus he urges Bela to be responsible and bring back those books. (partial re-post from my MHMS Media Blog for my kids - but with bonus snarky extras!)

Now...i've ranted before (my SL Blog in '08) how annoying and MarySue I think Bela is...sorry hon....but here's the whining clumsy little thing who still can't quite get the hang of returning those Library Media Books!


....but for those who haven't met Mary Sue let me re-post that for you here! 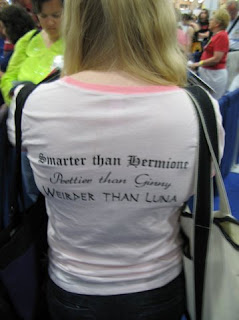 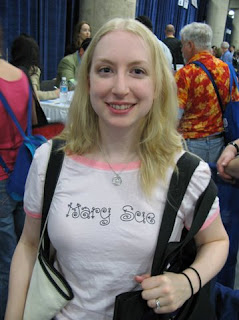 It was a hot August 24, '08 ...and i was at the pub with two of my most beloved gorgeous/ smart/amazingly erudite/and perceptive English teacher friends - Leila & Alice...and we were all brainstorming and talking about FAN FICTION... & how to use it as a force of good with her advanced HS English students...using Blogs, Ning's and Wiki's Oh my! and how the kids could choose a character and write either a journal (like the Very Secret Diaries of LotR! Hint: read Legolas first!)...on a wiki as that character...or create a Ning page with each student having a Ning page as the character and then they would write back and forth IC and come up with alternate events, etc... that they would expand upon (still hashing this out..as a librarian and a ed tech specialist i see the potential for this as well as for collaborative writing using my Wiki's...any suggestions made as comments are VERY welcome!)

.....anyway, the topic of Mary Sues came up and my friend Alice taught us all about what and who she is!... don't know what a Mary Sue is?... watch my dear below....Oh and yeah...she told us BELLA from Twilight - CLASSIC Mary Sue! WTH!?

According to Alice, Mary Sue the concept originated in 1974! with a Star Trek FF parody - and there is a homo-erotic twist to it that somehow seems to come out in FF. Starting of course with Kirk/Spock 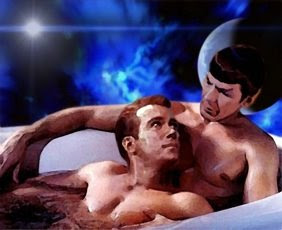 and ending with Harry/Ron as seen here in a HILARIOUS clip from the Soup!

and yes...i'm starting to agree with my adorable panhellenic brilliant/adorable/gorgeous/ learned young friend Alice... and think Bella in Twilight is a Mary Sue! 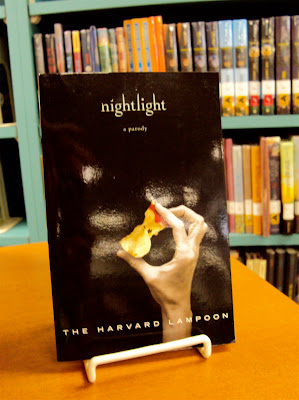 In related news:
The Harvard Lampoon sees the fodder for fun....and has created...Nightlight!
From 109d
"The humorists at the Harvard Lampoon are taking aim at klutzy girls and sparkly vampires with their novel-length Twilight parody Nightlight. Expect a vain, vampire-obsessed narrator, unnecessary adjectives, and a computer geek who simply can't be bothered with girls."

But there are plenty of parodies of Meyer's writing style, such as when Belle describes being "unconditionally, irrevocably, impenetrably, heterogeneously, gynecologically, and disreputably" kissed by Edwart, and the scene when we first meet the supposed vampire boy - a quote from the book" 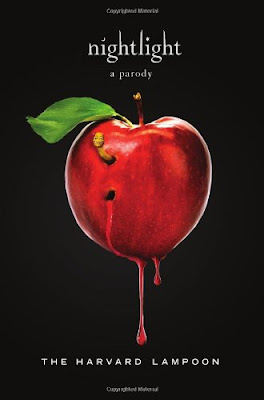 "It was then that I saw him. He was sitting at a table all by himself, not even eating. He had an entire tray of baked potatoes in front of him and still he did not touch a single one. How could a human have his pick of baked potatoes and resist them all? Even odder, he hadn't noticed me, Belle Goose, future Academy Award winner.
A computer sat before him on the table. He stared intently at the screen, narrowing his eyes into slits and concentrating those slits on the screen as if the only thing that mattered to him was physically dominating that screen. He was muscular, like a man who could pin you up against the wall as easily as a poster, yet lean, like a man who would rather cradle you in his arms. He had reddish, blonde-brown hair that was groomed heterosexually. He looked older than the other boys in the room - maybe not as old as God or my father, but certainly a viable replacement. Imagine if you took every woman's idea of a hot guy and averaged it out into one man. This was that man."

Parody is such human nature...you like something, it gets blown up, you tear it down and make fun of it...Next "bring your book back" blabberize - by request of my 8th graders...Justin Bieber!