Neil Gaiman Does Doctor Who 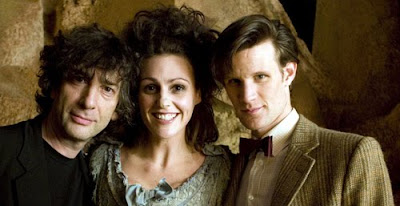 “The Doctor’s Wife” will deal with the Time Lords, The Doctor’s alien race. At this point in the long history of Doctor Who, The Doctor is the only surviving Time Lord known. As he, Amy and Rory travel to the summons of some old friends, another possible survivor is revealed. Idris, presumably the blushing bride, will be played by Coronation Street‘s Suranne Jones." 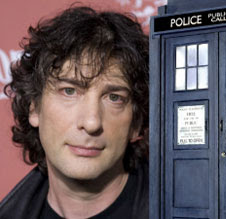 According to Gaiman only one important (and long awaited!) scene was cut because of my time-traveling favourite redhead! "If I wanted to tell you that we only cut the scene in the TARDIS swimming pool because Karen Gillan cannot swim (“But that’s impossible!” I told them. “Her legs are as long as two fully grown men! Tell her she just has to wiggle them! She’ll whoosh through the water like a speedboat!”) nobody could stop me."
GAH! The SPOILER PLOT is described as follows:

The TARDIS, drawn off course by the most unlikely distress signal, materialises outside of time and space itself. In this bubble universe, the Doctor meets Idris (Suranne Jones) and her aunt and uncle, who live together in a scrapyard of impossible things. Idris, it seems, is mad. And when the Doctor finds out why she is the way she is, things start to get a bit complicated. And unmentionable.

"The Doctor is played by Matt Smith, Amy by Karen Gillan, Rory by Arthur Darvill and Idris by Suranne Jones. (River Song does not appear in this episode) Gaiman expressed joy at the opportunity to write for the long-running series. The author was quoted in a colorful interview with The BBC: “I don’t know what it’s like to be God… Until that very first moment when you get to sit down and type the words in your script: INTERIOR. TARDIS.
This episode will feature:

There’s also some recent good news for fans of Doctor Who spinoff Torchwood: the fourth series, Miracle Day, will premiere in the US on July 8th." - Live for Films If only they would bring back my beloved Ianto Jones - I was part of the Save the Coffee Boy campaign that I blogged about in 09. Alas, to no avail! [audible sniff]


And now....an Interview with Neil Gaiman himself about his episode! 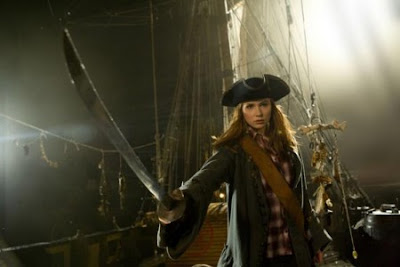 As a former privateer wench, you know that a Dr. Who Piratical episode would give me the geeky shivers...so I give you... the Curse of the Black Spot!

Are you a Whoo Noob?

Neil Gaiman has the perfect introduction to the series. He’ll tell you everything you need to know:

"There’s a big blue box. It’s bigger on the inside than the outside. It can go anywhere in space and time, sometimes where it is supposed to go. Something will go wrong, and there’s some bloke called The Doctor who’ll make it all right because he’s awesome. Now sit down, shut up and watch Blink." - Bleeding Cool

Want to learn more? Thanks to the AWEsome blogger, Charles Skaggs - Check out the

A wiki covering Doctor Who, Torchwood,
The Sarah Jane Adventures, and K9
that anyone can edit!
This wiki contains spoilers. Read at your own risk.

So Who is YOUR favourite Doctor? What do you think of Matt Smith? What's your favourite episode?

*Hello Sweetie! A favourite line by River Song - love it!