Uptown Charlotte: Places to Eat & Things to Do! 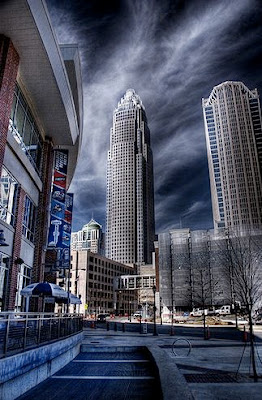 We're Going Uptown!
apparently 20 years ago the Queen City of Charlotte decided to change the name of its city center and name it Uptown rather than Downtown...as "a way to help civic leaders promote the upbeat, positive attitude of the Queen City."

Cool things seem to go on ALL the time uptown...from a recent blog about Charlotte Restaurant Week ...(which we just missed, doh!) a lot of the uptown restaurants participated in specially priced dinner deals...and even though the week is over...the website sponsored by Uptown Charlotte Magazine gives a snapshot at some of the best places to eat in uptown Charlotte...WITH menus & parking (maps!) information!

From Steaks to Sushi....Brazillian Rodizio to Seafood and Southern fare...all in about a 12 block radius.

If you play Buzztime trivia [cough cough] there's Picasso's Sports Cafe within walking distance of the Convention Center that has it and good pizza, too!

Also check the b There! thread Exploring Charlotte

from a recent posting in the CityData.com forum: