There's a #Hashtag for That! & Mean Tweeting!


Baratunde Thurston speaking at the Web 2.0 conference about social media, the use of hashtags memes, and the power of community consensus.

But sometimes the community can be mean & spiteful.

That is why i am upset at what happened to Danah Boyd at that self same conference. It was a snafu where I really feel that those in charge of the technology & planning of the Web 2.0 conference really let down their speakers. Apparently Danah had a new talk she wrote for the conference, she regularly uses notes for her talks that she reads from her laptop that she uses as a teleprompter. But for some reason the Web 2.0 people said she couldn't have that laptop for her presentation so she had to use paper (!!??!!)...they also didn't tell her to the last min that the Twitter backchannel was going to be fed & displayed 10+ feet high behind her and when her talk went south...people started tweeting MEAN. Blood in the water and the sharks were biting and people started laughing in some sort of sick schadenfreude delight over the situation.
I wasn't there but there are several people who have written about here:
Danah Boyd even wrote about it herself - explaining how she didn't know what was going on behind her. It has sparked a lot of controversy and a highly passed around cartoon by Mr. Rob Cottingham. 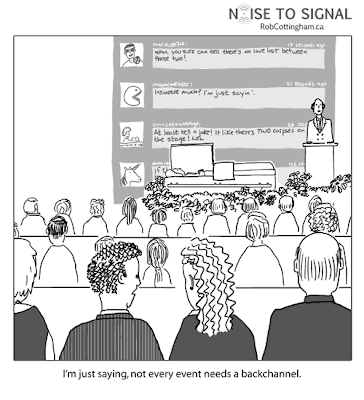 And it just makes me mad AND sad! This is why some people don't want a backchannel at all at a conference...they're scared of it, or worried about it....thinking that it's dangerous.

the backchannel is new...it's exciting! i LOVES it! i enjoy going back over it after i speak (and no one pays for me to speak yet..i even pay registration! LOL) ...but it's a wild west frontier out there...it needs to be rich, informative, fair, and talking about the IDEAS and not the hot blonde (or redhead) chick talking too fast! (Btw, i do that, too.. i also crack corny irreverent BAD jokes when i get nervous...we middle school peeps are SO obvious!)

SO...a moderator who has a voice to the speaker and the audience helps direct the channel ...also, like middle schoolers, if we know we're BEING moderated i think we behave better! the sneaky passing of notes - with cartoons of the teacher - is not what we're going for here folks. it's the vibrant conversation that compliments the presentation...letting people share their ideas or related resources.

Danah, i saw you present at AASL in Charlotte...and grrl you rocked! of course i was already a fan....(not fangirl!)...and some of what you preach i've been saying for years (so i was saying hellyeah! in me heid a LOT!)

...like we can't teach kids to be internet SAFE just AWARE. and that the kids that are getting in trouble on the interwebs are kids who are in trouble already... Oh and that our old MySpace pages are now a social history archive.

we NEED your message, Danah! ...it's important and informative and it's not always what educators or administrators want to hear!

...Social Media is here people!...we can't put that particular horse back in the barn or tie it down with firewalls, restrictive AUP's, and knee jerk reactions to when something new & scary comes out... we need to tame it and ride it cause otherwise we're left in the dirt. Ok...so like the metaphor is a little bit much but you get what i'm saying here...Oh wait! i gots another! i'm waiting for the googlewave to be held back rather than flow in my county soon...heh heh see? i didn't say surf...\\FTW!// i'm also gonna quote @arielwaldman: "Google Wave sounds like a bad date so far: won't apologize for being difficult and talks about how awesome they are"

So keep talking Danah!...don't sweat it anymore...it sucked! the situation not the talk... it's over BUT it started this new conversation and hopefully will make people think and THAT is the MOST important part of this whole spectcale!