In 2007 i blogged about the first Did You Know by Karl Fisch for my parents, teachers & community... because when i saw it (the first one) it rocked my world! back then it was MySpace that could have been the 8th largest company....Facebook wasn't even invented yet...nor Twitter!...we're still not there in the school system (at least not mine) using social networks FOR us rather than being AGAINST us! i SO admire Web 2.0 savvy school librarians like Buffy Hamilton...her Unquiet Library blog & webpage epitomizes how we should use Social Networks FOR us! Her blog (see all the red blobs!?) gets an average of 300 visitors.... A DAY.

Buffy is teaching kids that they need to be ETHICAL and AWARE of what they do on the intarwebs ...what their digital footprint is and what kind of footprint they're leaving....how people will go back and see the doofy stuff they post now 5, 10, 15 and 20 years from now.
her High School library has a Facebook Page with 277 fans 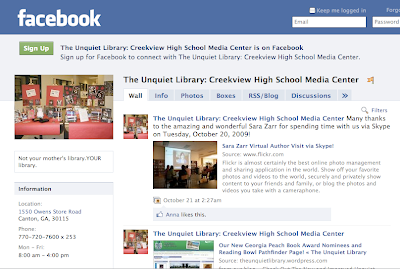 Now i know i can't do some of the things Buffy is doing because i'm a Middle School librarian and i respect the 2000 FTC Children's Internet Privacy Act heck, i quoted it on my 2000 Internet Safety for Parents & Teens webpage! but things have changed DRASTICALLY since then! i'm just saying....we can't bury our head in the sand any longer... the internet is not going away...and though i preach the use of the Databases...i think we're doing our kids a disservice by not teaching precise and savvy Google searches or using some of the Google products. but i'm a rebel, kids.....i still maintain my Back-to-school advice for safe & ethical social networking.
in the meantime....
i'm jealous of Buffy! (don't tell her!...i'm SO excited to be meeting her next week and working with her on the AASL Library Tools Smackdown!) ....because she's doing what i WANT to do!....

for example: last year i wanted to have Newfoundland author

Dale Jarvis talk to my kids via Skype but it was BLOCKED! instead we did it through pre-recorded storytelling on Teacher Tube....[le sigh] and just last week she had her First Virtual Author Visit via Skype with Sara Zarr !!!.... we're getting there....REALLY....i just feel like i'm sometimes chompin at the bit!

anyone else feel like this? anyone think lifting some of the firewalls would be dangerous and not to be considered? i mean what's classroom management for anyway!? Gah!!!
buffy hamilton did you know? digital footprint interent ethics skype twitter facebook unquiet librarian unquiet library