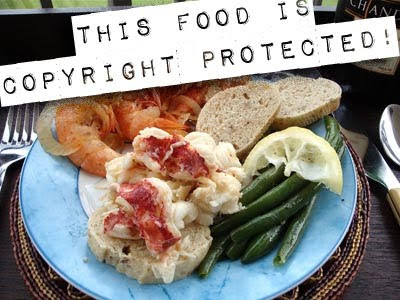 So my weekend thing (if not at the beach or otherwise engaged in play) is to clean out my DVR - Anthony Bourdain and No Reservations is a fave. Rock and Roll bad boy chef with a snarky potty mouth is to die for!

His recent show was about being Obsessed. And because i'm ADD and i watch TV with a laptop it led me to Google some of the people being covered such as the militant food bloggers who founded eGullet, Off the Grill, and Opinionated About Dining. Then i stumbled upon a Food & Wine article how Steve Shaw from eGullet.com proposes copyrighting recipes as a response to copycat chefs plagarizing recipes from other top chefs.

Says Pete Wells of Food & Wine: "When Steven Shaw, eGullet’s cofounder, first weighed in on the site’s discussions, he felt the best way to deal with food forgery was 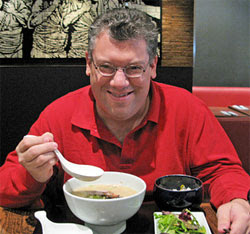 through public shaming: Put the evidence out there and let copycats feel the heat. After a few days or so, though, he had a change of heart. Shaw, a reformed lawyer, learned in law school that recipes can’t be copyrighted. "Then one day I was sitting there," he says, "and I thought, Why not? It doesn’t make any sense. The assumption is that a list of ingredients is like a formula, as opposed to literature or art or craft. But I think serious recipes really are a form of literary craftsmanship. You can copyright the world’s worst photograph, but you can’t copyright a recipe, or its expression as food? That’s absurd!"

Interesting thought. How could this happen? How in the world would you accomplish this? Pete Wells continues:

"Shaw told me he hoped to convene a summit meeting with some of the smartest people in the food world to hammer out a workable model for copyrighting food. First, he’d propose changing the copyright code, possibly by making cuisine a subdivision of the existing category for sculpture or acknowledging recipes as a form of literary expression. For enforcement, Shaw leans toward creating a system like ASCAP, an association that collects composers’ royalties for public performances of songs—on the radio, in nightclubs and so on."

"Copyrighting recipes may be the most radical idea to hit the food world since the invention of the menu."

SO, Librarians....Writers....we're not the only one to think of copyright and intellectual property!

Read the whole Food & Wine article, New Era of the Recipe Burglar and then read Meg Hourihan of megnut.com and her response to the controversy.

Oh and my steamed lobster & shrimp dinner i made at the beach pictured above? it's copyrighted!...but prolly by Old Bay! 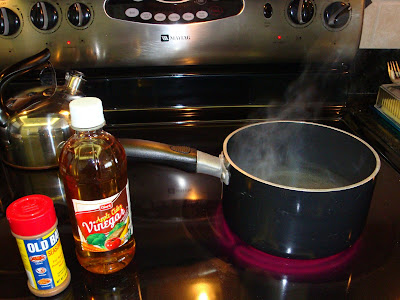 But what do you think Librarians? Can you copyright a recipe?

**OMG WTF=Oh my Goodness, Where's the Fire! That's my story and i'm sticking to it!