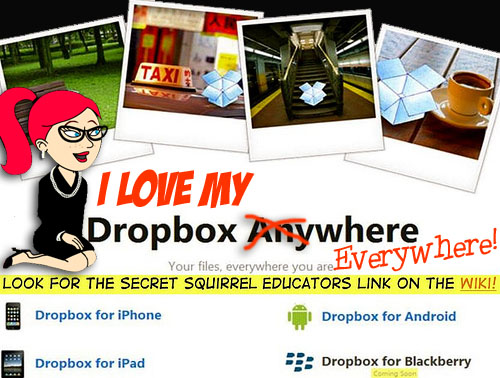 I eagerly drank the Dropbox Koolaid last year thanks to my good friend from METC_CSD Gina Hartman - I was sold when she said "because of Dropbox I don't care if my laptop crashes" My jaw literally dropped my eyes bugged out, and I realized THIS WAS BIG!  Now I love Dropbox more every day! Dropbox brings together seamlessly all of my devices. All of my Macs (iPad, Macbook laptop, & iMac work desktop) and my Android Fascinate phone (UPDATE 11:14 - iPhone 6+) . Between Dropbox & GoogleDocs - I really don't need to carry around flashdrives (But I still do -cause networks *can* still go down!) I'm a girl scout that way.

The Cloud is here! Give it a shot by joining Dropbox – Are you a teacher? Dropbox loves schools!  After you join, if you are an educator you can also get double the credit for referrals. That's 500 MB for you per friend & an extra 250MB for them that with your special .EDU account. (Update 11:14 - not sure about this anymore) Make sure to use your school email addy! It only kicks in once they Join AND INSTALL Dropbox on at least one device! …Sure, it’s a total pyramid scam of Dropbox goodness! See my Daring Tech Wiki for more cool Web 2Oh Tools!

Adore you Gina Hartman of METC_CSD for hooking me up with this! Using the Magic Pocket: A Dropbox Guide (published by MakeUseOf) - PDF !

(I used keepvid to upload this to my Flickr so you could watch it at school)
PDF iPad Reading Goodness!
I use this feature all the time! It's great! You can "easily read the PDF files in the iBooks application which is installed on your iPad. You can do this by opening one of your PDF files on your iPad and then pushing the “Open in iBooks” button which appears on the upper right side of the screen. The button provides a way for you to open the PDF file in iBooks and automatically imports the file into the iBooks application. Also, if you sync your iPad with iTunes the application will automatically be synced with your computer" - Sarah Park Techwhizbackup

You can also get more storage space by doing a few fun tasks! See below!